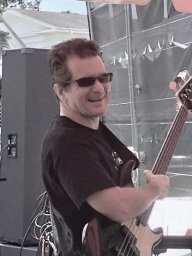 Drummers I share gigs with joke that we are going to learn to play bass since bassists are so hard to find. I got tired of joking Mar 29, 2015